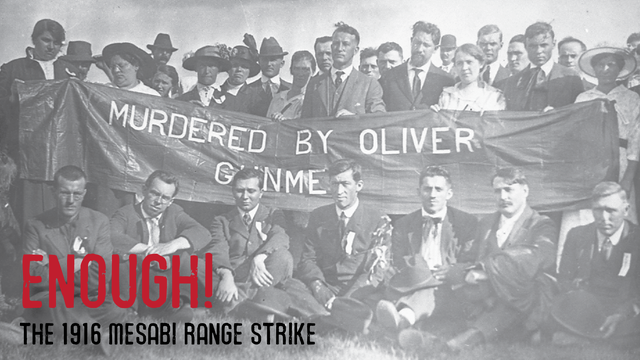 As U.S. Steel predicted record profits, miners’ wages stagnated on the Range. Cost of living rose. It was more expensive to live here than in the Twin Cities. Insufficient wages for dangerous, backbreaking work sowed the seeds of discontent. Favoritism, bribery, and an uncertain paycheck made things worse. Miners had had enough and declared a strike. They marched town to town, mine to mine, and encouraged others to join.

Soon after, the Industrial Workers of the World (I.W.W.) sent some of their most experienced organizers to assist the miners. Riots, marches, and shootouts broke out across the Mesabi throughout the summer. Every side has a story to tell in this exciting exhibit.

Also, be sure to grab a Virginia Strike Guide to continue the adventure and visit historic sites of the strike in your own backyard!