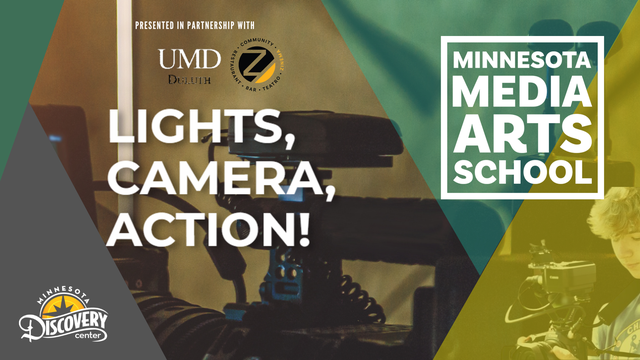 The Minnesota Discovery Center's Minnesota Media Arts School, in partnership with UMD Duluth and Zeitgeist Film, is an affordable option for the Northland’s diverse creative community ranging from filmmakers, graphic designers, multimedia artists, and theatrical artists to learn, work, create, and connect. With teaching hubs in Chisholm and Duluth, we will add important contributions to the regional film ecosystem.

Our goal is to empower, support, and educate Northland community members ages 16+ as active participants in shaping our culture, and engage diverse communities to rethink the way we view film, art, and local storytelling. We provide access and a platform to work, learn, create, and experience filmmaking and media production in our community.

Documentary film is a process of curiosity, discovery, and storytelling. In this workshop, we will explore the many different types of documentaries and build the basic technical skills to create successful nonfiction films, including selecting compelling topics based on available resources, pre-production, lighting, sound recording, cinematography, interviewing, finding the story, and editing. Over the course of the workshop, participants will each create their own short documentaries (max 10 min) and will leave the course with the skills and experience to make many more.

Equipment for this class will be provided!

Instructor Elizabeth Chatelain: A North Dakota native, Elizabeth Chatelain has directed several documentary and narrative shorts including MY SISTER SARAH, about her sister’s lifelong struggle with drug abuse and recovery. It won the International Documentary Association’s Award for Best Student Documentary and was a Student Academy Award Finalist. Her films have screened at festivals across the country and the world, including Interfilm Berlin, Uppsala and SXSW. She has optioned her feature, SUNDOGS, which participated in the Berlinale Script Station and was an Academy Nicholl Fellowship Semi-Finalist and won the Showtime Tony Cox Screenplay Competition. She was selected as a Blacklist/Women in Film Feature Fellow in 2020 and a WIF/Sundance Financing Intensive Fellow in 2022. She received an MFA in Film Production from University of Texas-Austin and an MFA in Dramatic Writing from NYU-Tisch.

Do you have a great idea for a feature film? Many have great ideas; only few craft them into screenplays. In this workshop, learn screenwriting fundamentals as you develop your idea from pitch to outline to screenplay. While no previous screenwriting experience is required, you should come to the workshop with ideas for short films.

Intructor Matthew Dressel: Matthew Dressel is a screenwriter and freelance editor currently living in Duluth, Minnesota.  His first feature length screenplay (tentatively titled Killing Daniel) has been completed and is set to be released in 2022.  The film features Joel David Moore, Bob Saget, and Iggy Pop. Matthew has written, directed, and edited several short films that have gone on to receive exhibition deals and awards.  Return to Menu, a short comedy of errors, was featured in the textbook Viewpoints. Before moving to Duluth, Matthew worked as an assistant editor and copywriter in Los Angeles, creating content for Walt Disney Studios, 20th Century Fox, Lionsgate, and many more.

To view classes at the North by North Film School located in the Zeitgeist Arts Building in Duluth, MN - CLICK HERE.