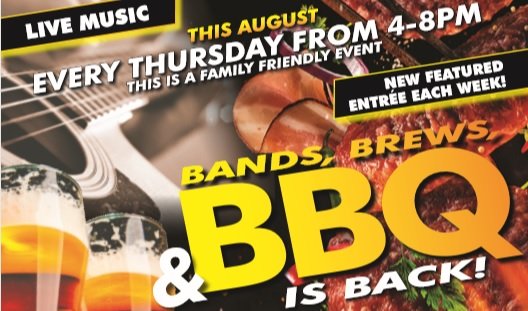 Every Thursday in August from 4-8pm!

Bands, Brews, & BBQ is BACK! Each Thursday in August, we will feature a new signature BBQ item, cocktail and band!

Each signature item will be served from 4-8pm and the band will play from 5-7pm!

We will also be offering our regular Rustic Pig Food Court menu that we serve every Thursday-Saturday 12-8pm.

Jayne plays music from the 50‘s through today in all genres such as country, oldies, rock and roll, classic rock, and some pop.

Featured Cocktail: Under the Stars

The married duo have been members of the local music community for parts of the last five decades. Their musical tastes include all styles of music from all eras. Their vocal harmonies have been the foundation of their collaboration supported by Dan’s tasteful and melodic guitar strains over Sharon’s rhythmic counterparts.

Come enjoy the harmonious sounds of BitterSweet. BitterSweet is an acoustic duo with Mary Jo Grizzard on keyboard & vocal and Jay Hoiland on guitar & vocal. They perform some originals, classic rock, country & blues.

Featured Cocktail: Under the Sunset

Richie will get you to sing along and make you laugh during his set while he sings covers and some originals with his assortment of guitars.

This event will take place outdoors in the Rustic Pig Food Court, neatly tucked away on the Minnesota Discovery Center’s award-winning campus. Safety precautions have been implemented to allow for adequate social distancing. Attendees will be required to wear face coverings, as mandated by the State of Minnesota, in our indoor facilities or outdoors when social distancing cannot be obtained.